WPP’s comprehensive inventory of new and used generators, covering all tier levels, is unequaled in the industry. Search our inventory.

Since the 1950s, the US government has been making plans to combat air pollution.

From its inception to enforce the Clean Air Act of 1970, a law which provided much more stringent emission regulations, the Environmental Protection Agency (EPA) has implemented regulations strategically to improve air quality by reducing harmful emissions.

Diesel exhaust is one of these harmful emissions, and as such, the regulations have had an impact on on-road and off-road vehicles and engines, including non-road diesel engines and stationary diesel engine generator sets (find out if diesel generators really are bad for the environment).

But though this may sound as though it were a hardship for this industry, it has led to engine improvements that reduce emissions and boost performance.

To make the process go smoothly, an implementation system was designed to allow all stakeholders—including scientists and manufacturers, among others—to develop the knowledge and technologies necessary to meet these regulatory goals. Really, the implementation system is more accurately described as a tier system put in place to accommodate the process. Here, we outline what you should know about the tier emissions ratings for diesel generators.

What are Tier Levels?

There are four tiers in place to reduce harmful gases into the atmosphere, and each tier was built off the other to make compliance more manageable. Each tier level also has a certain standard with regard to harmful emissions and provides a cap at which point emissions must be limited. The standard progresses over the years in accordance with the tier level.

The intended and primary emissions to be reduced include:

Currently, all engines (with a few exceptions–discussed later) are at the Tier 4 Final level, meaning the engines are designed to emit reduced harmful emissions using diesel oxidation catalysts (DOCs), diesel particulate filters (DPFs), and selective catalytic reduction (SCR) systems. Engine emissions are still a work in progress, especially for diesel engines, both on and off the road.

At Worldwide Power Products, all diesel generators in our inventory, whether for purchase or rental, meet the emission tier standards for their role.

As we will explain below, although Tier 4F is the current standard, not every type of application or engine will fall under its auspices. For example, if you require emergency power only, a Tier 2 or 3 generator could work for you depending on size. If you prefer to buy pre-owned, a used Tier 2 generator can fit the bill as well.

By carrying both new and used generators that span every tier emission level, we ensure we have the right machine for your job.

Our pre-owned units are thoroughly inspected, tested, and certified for optimal performance by our experienced team of technicians. 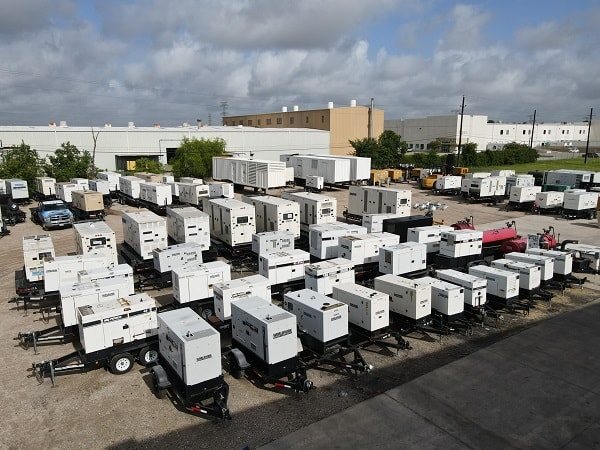 How Do Tier Levels Relate to Generators?

Diesel engines were not the initial target when the EPA regulations were first published and implemented. But they are very much the subject of these regulations now. In 1998, non-road engine regulations were put into place as a 3-tiered system (with the 4th tier later added). Each tier involves a phase-in period over a number of years and in accordance with the engine’s horsepower rating. Below is an overview of these three tiers and how they relate to generators.

Tier 2 standards were published in 1999 and Tier 3 standards were published shortly thereafter. These phases, however, did not begin until 2001 with all engines to be in compliance by 2008. These two levels required engines that were more sophisticated in design and advanced in performance in order to meet the criteria set out in the regulations. The below table identifies Tier 2 and 3 standards related to diesel engine power and harmful gases to be limited.

To note, sulfur content was not originally limited by environmental regulations in Tier 1 for non-road diesel fuels but was later mandated and required to be met by 2007 in Tiers 2 and 3.

Tier 4 is in effect today, so all new prime power and portable diesel generators should be manufactured to meet this tier requirement. Tier 4 is, of course, the strictest of all previous regulations and requires the most advanced technologies to achieve the greatest reduction in emissions available today: near-zero emission levels.

Tier 4 emission standards began being phased-in in 2008. The regulations set out to reduce NOx, particulate matter, and hydrocarbon emissions substantially with respect to all off-road and on-road engines and generator sets. Carbon monoxide standards, however, remain relatively similar to those established in Tiers 2 and 3.

Who must comply with these standards?

Anyone manufacturing diesel engines, either for on-road or non-road purposes, including generator sets, must comply with these standards. That said, the rules do not apply to all types of power generators. Generally speaking, all non-road diesel engines, gensets and heavy equipment alike, rated at 56 kW and higher and are considered as prime generators (as opposed to standby) must comply with Tier 4 standards.

How do diesel engine companies meet the standards established by the EPA emission tier system?

Manufacturers, designers, and other relevant companies must improve the technologies and design of diesel generators so that they are in compliance with the law. Examples of what companies are doing to be in compliance materialize in a number of ways, including:

As noted above, only prime generators need to adhere to Tier 4 standards. Standby (or emergency) gensets are only subject to Tiers 2 and 3, not Tier 4. As such, these machines used as standby only machines do not need to be updated if in compliance with Tier 2 or 3 standards. All our generators, whether for purchase or rental, meet the emission tier standards for their role.

We noted at the beginning that though the tier-system seems to burden manufacturers and users of diesel engines and generators, it does offer benefits, too. Some of these benefits include:

Overall, your Tier 4 generator benefits you from all angles: health, expenses, performance, efficiency, and productivity.

What Comes After Tier 4?

Now that we are at Tier 4, what’s next? Tier 5 is the natural response, but the EPA has done little to move towards it.

That said, most generator manufacturers do not operate or market to the United States alone: Europe is well on its way to phasing in regulations that could be considered as Tier 5 standards. Stage 5 in Europe, however, is comparable to its Stage 4 standard, so big changes are not anticipated; all to be expected is that companies keep moving forward with emission reductions and efficient productivity made possible through newer and more advanced technologies.

Because of the similarities between Stages 4 and 5 in Europe, manufacturers do not have to worry about compliance so long as in compliance with Tier 4. And we at Worldwide Power Products are in compliance and intend to keep moving forward — always keeping our eyes on the future, today.