Below you will find answers to our most frequently asked questions.

How do I determine what size generator set is required for my site?

By providing a summary of the sites different horsepower or amperage loads and the voltages they require, we can use a sizing program to determine your power requirements.  It may be necessary to use a licensed electrician to perform this site survey.

Based on this data we can recommend a generator set that will provide the power your site requires.

What is the difference between a emergency and non-emergency generator set?

Emergency generators are exempt from the Tier 4 rules because these engines run infrequently and thus would not be among the major contributors to total NOX and PM emissions. Emergency engines built after January 1, 2011, can be sold meeting Tier 2 limits and do not—by EPA definition—require exhaust after-treatment (Table 1).

But the EPA definition of emergency is strict. To qualify for the exemption, an emergency generator set engine may run only when the normal power source such as the local utility fails, except for tightly limited maintenance and testing.  Generators used in peak-shaving, revenue generation, and similar applications do not qualify for the EPA’s emergency genset exemption. There is no Tier 4 limit on the number of hours an emergency generators can run in an actual emergency. However, non-emergency run time is limited to a maximum of 100 hours per year for maintenance and testing. Therefore, many applications running low-use hours—for example, 101-200 hours per year—fall into the non-emergency category and must meet the newly enacted Tier 4 standards.

The current challenge that owners are facing is that factory-certified solutions available for the >560 kW range of generators is extremely limited. This situation leaves them to seek aftermarket systems that will satisfy emissions requirements and allow for field compliance.

What are U.S. EPA Tier 4 regulations?

In 2004 the EPA published the final rule introducing Tier 4 emission standards, which are to be phased-in over the period of 2008-2015 The Tier 4 standards require that emissions of particulate matter (PM) and oxides of nitrogen (NOx) be further reduced by about 90%.   NOx are known to contribute to the formation of ground-level ozone, and particulate matter exposure has been shown to have adverse health effects on the respiratory system.  Tier 4 emissions levels are similar to those required by the 2007-2010 standards for on-highway engines.

Tier 4 refers to the latest emission milestone established by the U.S. Environmental Protection Agency and the California Air Resources Board applicable to new engines found in off-road equipment including construction, mining and agricultural equipment, marine vessels and workboats, locomotives and stationary engines found in industrial and power generation applications. As of January 1, 2014, these emissions standards apply to new engines that power equipment commonly found in most construction and agricultural applications while new engines manufactured for much larger applications including marine, locomotives must have met the standard by January 1, 2015. These emissions standards apply to new and remanufactured engines and do not apply to older engines.

The Tier 4 emission standards—phased-in from 2008 through 2015—introduce substantial reductions of NOx (for engines above 56 kW) and PM (above 19 kW), as well as more stringent HC limits. CO emission limits remain unchanged from the Tier 2-3 stage.

Engines Above 560 kW. Tier 4 emission standards for engines above 560 kW are listed in Table 4. The 2011 standards are sometimes referred to as ‘transitional Tier 4’, while the 2015 limits represent final Tier 4 standards.

Other Provisions. The Tier 4 regulation and later amendments include a number of additional provisions:

Do Tier 4 regulations only impact the US?

What is Tier 4 Interim vs. Tier 4 Final (Stage IIIB/Stage IV)?

How do I meet or exceed Tier 4 diesel engine emission standards?

Through advancements in engine design, modern diesel engines have been transformed into one of the cleanest prime movers available today. Some of these engine improvements include high-pressure common rail fuel injection systems, electronically controlled injector solenoids, and advanced turbocharging. While these improvements enabled engine manufacturers to meet Tier 2, and Tier 3 standards, in order to meet the more stringent Tier 4 interim and Tier 4 final regulations, exhaust after-treatment was required.

There are three major technologies used for exhaust after-treatment.

What is RICE NESHAP?

The US EPA issued a number of rules to control emissions of toxic air pollutants from existing stationary reciprocating internal combustion engines (RICE).

The rules, entitled National Emission Standards for Hazardous Air Pollutants (NESHAP) for Reciprocating Internal Combustion Engines, are intended to reduce emissions of toxic air pollutants—such as formaldehyde (HCHO), acetaldehyde, acrolein, methanol and other air toxics—from several categories of previously unregulated stationary engines. The EPA has determined that carbon monoxide (CO) can be often used as an appropriate surrogate for formaldehyde. Since testing for CO emissions has many advantages over testing for emissions of hazardous air pollutants (HAP), many of the emission standards have been finalized in terms of CO as the only regulated pollutant.

The NESHAP regulations for stationary engines are published in Title 40, Part 63, Subpart ZZZZ (63.6580) of the Code of Federal Regulations (CFR). Regulatory documents as well as fact sheets and related information can be also found in the US EPA stationary engine pages [3115].

Where does the NESHAP rules apply?

The NESHAP rules are applicable to “existing” diesel and SI engines, as well as to certain categories of “new” and “reconstructed” engines, as determined by their date of construction or reconstruction. “Existing” engines are defined as follows:

Emergency Engines. The NESHAP requirements apply to engines used for non-emergency purposes. The following operational requirements must be met by emergency engines:

What are the types of NESHAP emission standards?

The NESHAP regulations include three types of emission standards:

Can I operate a generator set on propane instead of natural gas?

Most natural gas powered generator sets can be converted to run on propane in vapor state. LPG Vapor conversions are the simplest. On the Ford ESG642 (4.2L) engine used by many manufacturers, addition of a Link Module and reconnection of one wire to the module is required. The natural gas regulator would need to be reset and an adjustment would need to be made to the fuel mixer and speed control.

Can a generator set’s output voltage be changed?

Many generator sets have twelve line leads (cables). Depending on the connections that are made between the load and the generator line leads, single-phase and/or three phase voltages are possible. When making changes to a generator sets output voltage, consideration needs to be given to the resulting output current. Replacement of the main circuit breaker is usually required. Other necessary changes would involve replacing analog type meters in a mechanical control panel, or programming changes to an electronic control panel.

Do you offer dual-fuel or bi-fuel generators?

Most of the diesel-powered generator sets we offer can be converted to bi fuel operation using one of several after-market add-ons that we can install quickly and inexpensively, without making any mechanical or physical alterations to the engine itself. With a bi-fuel add-on, generators can burn up to 70% natural gas, resulting in significant reductions in fuel costs and certain types of emissions. Dual fuel is a different type of engine from bi-fuel. To learn more about bi-fuel technology, click here.

Please contact us for specific detail or for a quote.

What are the maintenance requirements of my generator set?

The operation and maintenance manual for your generator set gives the periodic maintenance required and how frequently it should be performed. Many customers rely on Worldwide Power Products to perform those services through an annual maintenance agreement.

Please contact us for specific detail or for a quote.

When do the new emission regulations begin to apply?

Tier 4 Interim emissions regulations will be phased in by engine power category, followed by Tier 4 Final standards. The Tier 4 engine power categories are expressed in kilowatts (kW). Tier 4 began in 2008 for all engines under (<) 19 kW, and for those greater than or equal to 19 but less than 56 kW (19 ≤ kW < 56). For engines in the 130 ≤ kW ≤ 560 category, and those in the category for above 560 kW, Tier 4 Interim applies in 2011. Finally, for the 56 to 130 kW (56 ≤ kW < 130) category, Tier 4 Interim applies in 2012. Tier 4 Final standards generally are applicable three years after the Tier 4 Interim start date. [/av_toggle] [av_toggle title='What is next for diesel engine emission standards?' tags='' av_uid='av-97mq4u'] New, more strict European Stage V regulations began to be implemented in Europe in 2019, and continue in to 2020. Since the engine business is global, these European standards will very likely be adopted here in the US, and be referred to as “Tier 5”. There is still some debate over this as the EPA has not committed to adopting these standards.These new regulations will be relatively easy to meet with the technology that is available today. What regulators want to more stringently control is the ultra-fine particles of soot in diesel exhaust, the sub-micron level particles. These particles are considered to pose the greatest threat to lung health because they can lodge deep inside lungs and stay there. These particles can be removed by using a DPF (diesel particulate filter) on every diesel engine.For the future, if Stage V/Tier 5 is implemented as anticipated, a DPF will likely be included on every diesel engine, large or small, stationary or mobile. It appears that this will include diesel engines less than 24 horsepower that are currently exempt from Tier 4 requirements. [/av_toggle] [av_toggle title='What is tier 1-3 emission standards?' tags='' av_uid='av-7oqzla'] The 1998 nonroad engine regulations were structured as a 3-tiered progression. Each tier involved a phase-in (by horsepower rating) over several years. Tier 1 standards were phased-in from 1996 to 2000. The more stringent Tier 2 standards took effect from 2001 to 2006, and yet more stringent Tier 3 standards phased-in from 2006 to 2008 (Tier 3 standards applied only for engines from 37-560 kW).Tier 1-3 emissions standards are listed in Table 1. Nonroad regulations use the metric system of units, with regulatory limits expressed in grams of pollutant per kWh.

Manufacturers who signed the 1998 Consent Decrees with the EPA may have been required to meet the Tier 3 standards one year ahead of schedule (i.e. beginning in 2005).

Voluntary, more stringent emission standards that manufacturers could use to earn a designation of “Blue Sky Series” engines (applicable to Tier 1-3 certifications) are listed in Table 2.

Engines of all sizes had to meet smoke standards of 20/15/50% opacity at acceleration/lug/peak modes, respectively.

The regulations included several other provisions, such as averaging, banking and trading of emission credits and maximum “family emission limits” (FEL) for emission averaging.

What is an SCR (selective catalytic reduction) system do?

SCR is an emission control technology and it stands for “Selective Catalytic Reduction”.  An SCR system requires the use of diesel exhaust fluid (DEF or urea).  DEF is stored in a tank and then injected into the exhaust system. The injection causes a catalytic process that reduces NOx. 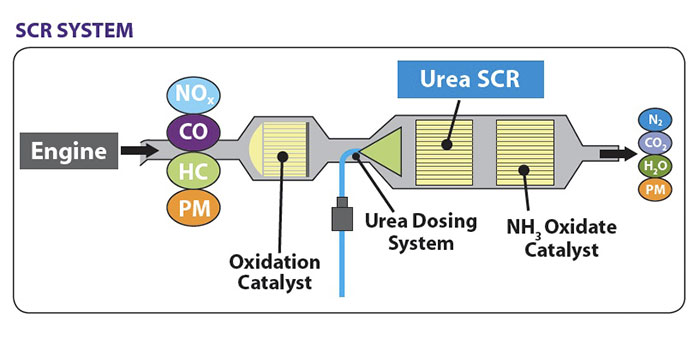 What does an EGR (exhaust gas re-circulation) system do?

EGR is an emission control technology and it stands for “Exhaust Gas Re-circulation”.  An EGR system works in conjunction with variable vane geometry turbo charger (VGT).  The intake air is diluted with exhaust gases.  The dilution reduces NOx formation during combustion.  This minimizes emissions to eliminate the need for particulate filters.  It can be used in conjunction with a DOC (diesel oxidation catalyst).