Of Diamonds and Ships and Engines…and Love

In 1953, when Marilyn Monroe sang, “Diamonds are a girl’s best friend,” she only confirmed what a lot of couples already believed―that diamonds are a valuable symbol of love. However, diamonds didn’t always symbolize such devotion. Certainly, they were popular with monarchs and other royal figures prior to the mid-1800s, because they were very rare. But when the South African diamond rush flooded the market with stones around that time, demand plummeted.

What brought diamonds back to the forefront of the world? Not Marilyn Monroe (although she’s certainly a very compelling figure), but a diamond company named De Beers. The company used its considerable marketing skills to persuade the world that diamonds where the symbol of love―a connection that remains strong to this day. 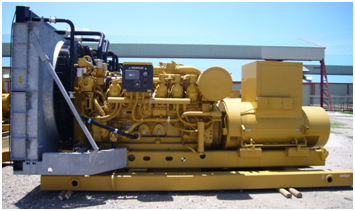 Just as De Beers successfully cultivated the world’s love of diamonds, it also gave WPP the opportunity to cultivate a new approach to its work in the mining industry. Debmarine Namibia, a joint venture between De Beers and Namibia, recently came to WPP to replace a failed back-up generator on one of its diamond dredging ships. Back-up generators may not seem crucial to dredging operations, but De Beers’ regulations prohibit dredging ships from running without one, so when one failed, operations shut down.

We were able to procure and deliver a surplus offshore generator set equipped with the famously reliable Caterpillar 3512B engine in two weeks via air freight. That’s really fast delivery―not faster than a happy bride-to-be says “I Do” when her boyfriend pops the question, of course, but a heck of a lot faster than a factory-new unit could be ordered and delivered (usually six months).

De Beers was delighted with our response, and WPP was pleased to service a customer that brings so much happiness to couples around the world. And just as De Beers built a connection between diamonds and love that is everlasting, WPP’s connection with―and commitment to―the mining industry will alsostand the test of time.

I looked for a good “diamond joke” to share with you, to celebrate this event. Most of them were too risqué for this blog, but I can share one that’s fitting (and you can tell your kids).

Question: How does a diamond feel in the morning?
Answer: Bright and sparkly!

I admit this may not be the funniest joke you will hear this week, but it perfectly describes the way WPP feels about its new customer, De Beers, and its dedication to helping other mining-industry firms keep their operations running at full speed.