For many companies, having a standby generator is important in keeping crucial services operating in times of an outage. For those involved in the healthcare industry, for example, this includes situations where having power can mean the difference between life or death. For those who operate data centers or work in the financial sector, this can mean the loss of hundreds to millions of dollars through devastating downtime.

That’s why it is so important to test backup power systems periodically to ensure they’re actually working when they’re needed the most. That process is called load bank testing. Here’s what you need to know about the generator load bank testing procedure. 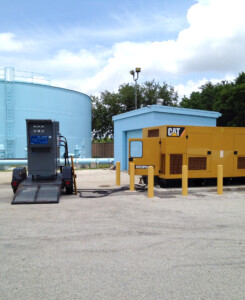 What Is a Load Bank & What Does it Test?

To put it simply, a load bank is a piece of specialized equipment that produces artificial loads on a generator. It does this by bringing the engine to a certain operating temperature and pressure to simulate the process of the equipment being used during an emergency situation. An easy way to think of it is that the purpose of load bank testing essentially acts as a dry run for emergency generator use and allows any flaws or problems to be exposed before a critical situation.

There are many benefits to load bank testing. The first is that you are able to enjoy peace of mind in knowing your generator has the capacity to work in an emergency situation. The second is that problems discovered during this process are usually much less costly to repair than those discovered during a critical situation. An ounce of prevention is worth more than a pound of cure, and load bank testing ensures that all small issues are handled before a major problem occurs.

How Often Does A Generator Need Testing?

The frequency schedule for load bank testing on a generator often depends on how the generator is classified and what it is a standby for. For example, if a generator is used as a backup for services associated with loss of life or serious injury—such as in a hospital setting—the testing requirements are much more frequent. Data center and financial organizations are generally held to the stronger guidelines, as well.

These standard guidelines are set by the National Fire Protection Agency (NFPA). Critical situations follow NFPA 110 and lesser situations follow NFPA 70. In most cases, it is recommended that non-mission critical generators are tested at 30% to 50% of their maximum load for thirty minutes at least once per month. Critical diesel generators could be tested much more frequently, but this wholly depends on individual requirements and industry regulations. If this monthly test fails, load bank testing for a minimum of two consecutive hours is recommended.

Companies can either hire a load bank for when the generator needs testing or have one permanently on-site. It largely depends on the needs of each company. A business that operates several generators is typically more suited to having its own load bank permanently stationed on-site, but the best solution is not always clear-cut. See if renting or buying offers the best solution for your business.

During the testing procedure, it is important to follow a checklist of best practices. This ensures safety for both the worker completing the test and helps keep a total power failure from occurring during the test.

Personnel should wear appropriate safety clothing including eye protection goggles, hearing protection, head protection, steel-tipped boots, gloves, and a high visibility vest. Employees should have experience in working with load bank testing and hold a qualification for administering the test. In most cases, it is recommended to handle this process with a certified organization instead of attempting it with your own internal maintenance staff. At Worldwide Power Products, we can supply the load banks and trained technicians to carry out installation and the test itself.

The actual testing procedure itself is not too complicated but does take a bit of knowledge in how the process works. The basic process features a few commonly understood steps.

The technician begins by starting and running the generator until the water temperature stabilizes. Then all manual or automatic switches are transferred to the emergency source. The generator is then step loaded with the load bank until the desired load level is reached. After the test, the technician removes the load bank load first and transfers all switches back to the normal position before allowing the generator to cool down according to manufacturer guidelines.

In more detail, the process occurs in this manner: