What Is Wet Stacking?

Over the years, the diesel engine has been developed and improved further, finding use in many applications including vehicle engines, construction equipment, ships, diesel generators, and many other heavy duty equipment.

Diesel engine generators are one of the most important and reliable sources of power in many fields including hospitals, mining fields, military zones, commercial industries, construction sites, transportation, and more. The generators work by burning fuel in order to produce motion, which is then turned into electricity by using electromagnets. They are used to generate power in places with little or no connection to a power grid, or as an emergency power backup when the power grid fails, or for other complex applications such as providing power support to the grid.

Diesel engines are known for their reliability, power, and durability, but they are not immune to complications such as overheating and wet stacking.

Wet stacking refers to a condition where a diesel engine has a thick, dark liquid substance dripping from its exhausts. The condition occurs when a diesel engine’s un-used/unburned fuel, carbon particles, and accumulated moisture gather around the exhaust system components. This may happen due to various reasons, but mainly occurs when the engine is operated at light loads for a long period of time; hence diesel fuel is not properly burnt off during use. The engine ends up sending unburned fuel and soot (carbon particles) to the exhaust system.

As mentioned above, wet stacking mainly occurs when a diesel engine is operated at light loads for a long period of time and thus diesel fuel is not properly burnt during combustion. In order for a diesel engine to run at maximum efficiency, it has to maintain an exact air-to-fuel ratio just like all other internal combustion engines. It also has to maintain a designated operational temperature to have a complete fuel burn.

Here is how it happens in detail:

When a diesel engine is run without load or with little load, it only generates adequate power to run its components and defy internal friction. It requires very little fuel for this and the temperatures that develop within the cylinders are way cooler than when the engine is operating at a high load.

Unlike a gasoline engine, a diesel engine does not rely on spark plugs but rather uses hot compressed air in its cylinders to vaporize and ignite fuel. As such, a certain designed temperate is required to help with the ignition. When the temperatures inside the combustion chamber are cooler than the design temperature, fuel ignites and burns; but it doesn’t burn completely. If this continues for extended periods of time, you will notice the remains of vaporized fuel and soot that condense and form deposits on the exhaust system in the form of a dark, thick liquid; with some resemblance to used engine oil. The appearance of this substance is what is referred to as “wet stacking”.

In a nutshell, wet stacking can be caused by:

Symptoms and Signs of Wet Stacking

The most easily identifiable sign of wet stacking is the black, thick liquid oozing from the exhaust system (could be the manifold, turbocharger, or exhaust pipes). The liquid can be confused for lubricating oil because of its thick density, but it contains soot from the unburned carbon particles in diesel fuel hence has a black color. In some instances, another sign would be hearing a miss in the engine during operation because of fuel buildup.

Also, when an engine has stayed without operating for a long period of time or it has been operating under light loads and experienced wet stacking, it will blow off some heavy black soot from the exhaust when placed under a load for the first time. The soot is as a result of the excess fuel being burned off. Continuous black soot coming from the exhaust under a normal load is also an indicator that not all the fuel burned completely. 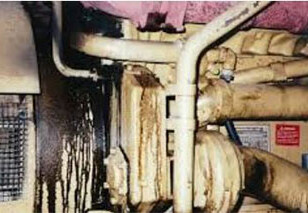 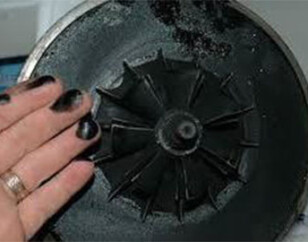 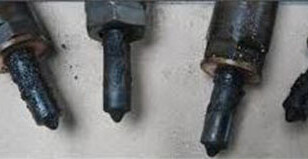 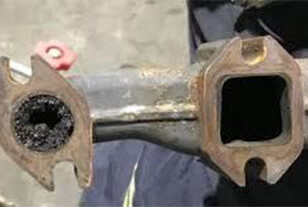 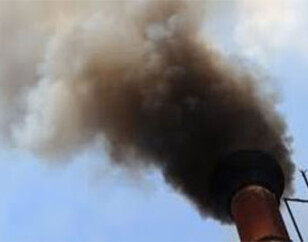 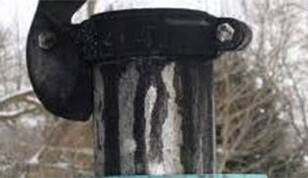 Wet stacking has several bad effects on a diesel engine generator, and if unchecked for a long period of time, it can result in reduced engine performance or permanent engine damage requiring an expensive major engine overhaul.

One of the bad effects of wet stacking is that when unburned fuel is removed from the combustion chamber, it builds up in the exhaust system and fouls injectors while at the same time leading to the buildup of carbon on the exhaust pipes, turbo charger and exhaust valves. When fuel injector nozzles are fouled with carbon deposits, they deliver larger droplets of fuel to the combustion cylinders than they are supposed to. Consequently, more of this fuel remains unburned and travels into the exhaust system; meaning wet stacking tends to result in more wet stacking.

When the carbon deposits from unburned fuel accumulate in large amounts, the engine’s performance ultimately dwindles as exhaust buildup produces back-pressure and deposits on a turbocharger reduce its efficiency.

Also, when the diesel engine operates below the set operational temperature, its piston rings don’t expand well enough to seal the gaps between the pistons and cylinder walls. This leaves space for unburned fuel to escape into the oil pan and dilute it, hence resulting in early engine wear.

How to Fix and Prevent Wet Stacking

For generators without symptoms of wet stacking, it is best for owners to undertake preventative measures so as to avoid it entirely. Consider running the generator a few minutes once a week, run it with an electrical load that reaches the set operational temperature, and have the generator regularly inspected and serviced by a professional.

For generators with symptoms of wet stacking, whether in the early stage or more developed stages, it is best to have a professional generator maintenance expert undertake the load testing procedure to determine if the engine can remain operational or if it needs an overhaul. If wet stacking is in the early stages, the professional will do a load test using the building’s load or using an external portable load bank. This will burn off the unburned fuel and correct the problem.

During your scheduled generator maintenance, the expert will bring in a portable load bank (If you do not have sufficient load within your premises) to run the generator at the desired load so that it achieves its set operation temperature and burns all fuel in the system.

Get in touch with Worldwide Power Products today if your diesel engine is showing signs of wet stacking or has any other issues that require urgent professional attention!