California Power Outages Hit More Than 500,000 Amid High Winds & Fires Across The State 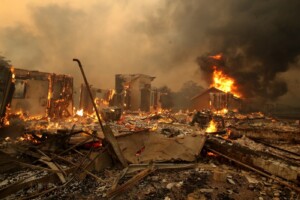 “More than half a million people woke up without power Thursday as California faces hot weather, strong winds and fast-moving wildfires that have erupted across the state.

Southern California Edison has shut off power to more than 24,000 customers in five counties — Kern, Riverside, Los Angeles, San Bernardino and Ventura — as the state braces for a day of strong winds. The utility is monitoring 286,000 more customers in those areas and Orange County for possible shut-offs as the day progresses.

About 179,000 Pacific Gas & Electric Co. customers in 17 counties across the state have also lost power. The state’s largest utility began cutting electric service on Wednesday afternoon to customers in the Sierra Nevada foothills and counties in the north San Francisco Bay Area. Shortly after 1 a.m. Thursday, portions of San Mateo and Kern counties were also in the dark.

San Diego Gas & Electric Co. has also cut power to more than 3,900 customers as of early Thursday and more than 37,000 are under shut-off consideration because of high winds…”