Over the last few years, the demand for clean energy sources has grown. As companies and homeowners alike start to consider the impact on the environment and overall fuel cost, many are opting for something a little bit different when it comes to choosing a power generation source. Natural gas generators have been one of the leading, cleaner alternatives, thought by many to be the bridge between the fossil fuel past and a renewable future.

In the US, interest in natural gas as a cleaner energy source has grown with the fracking boom in shale gas, leading to record oil and gas production levels thanks to a process previously thought non-viable. 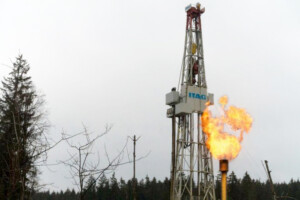 What is a Natural Gas Generator?

As the name suggests, a natural gas generator is a piece of equipment that utilizes natural gas to create a backup or primary power supply. They are sold in sizes ranging from small and portable to industrial and used for a variety of different applications.

In fact, they are very close to traditional diesel generators and come in options ranging from tiny enough to fit in a closet to large enough to power an entire hospital. Although a bit harder to find, there are some hybrid generators on the market that utilize both natural gas and traditional fuel, giving you the option of flexibility during a disaster.

Natural gas generators are commonly used as standby power sources for residential and commercial applications. Because they can be hooked up to existing municipal gas lines, there’s no need to store or transport fuel. There’s a reliable and steady supply of natural gas running through the pipes whenever the standby generator is called into action.

How Do Natural Gas Generators Work?

Most natural gas generators work in a similar capacity to a diesel generator. From a purely mechanical standpoint, the biggest difference between the two types of engines is how they operate. Natural gas generators require a carburetor that’s specially designed to manage the use of pressurized gas. Since the gas is in liquid form, it is either stored or piped in from another source.

Like diesel, natural gas generators have their benefits and drawbacks. They are cost-effective, efficient to operate, and can make operating within strict emission regulations easier. This is because natural gas is the cleanest burning fossil fuel.

What Makes a Natural Gas Generator Better for the Environment?

The environmental difference between natural gas generators and diesel generators is the type of emissions they give off while in use.

Natural gas itself is a type of greenhouse gas—called methane—before it is burned. While this does emit some emissions, burning natural gas for energy still results in a much lower level of pollutants than methods that burn diesel – a big deal for individuals and companies concerned about the environment and with emission targets to meet. The most common type of emissions released during the burning of natural gas include:

This might sound a little alarming, but the truth is that these levels are so negligible that they are not really much of a problem when compared to other fuel sources. In fact, the difference in emissions between natural gas and other fuel sources is so large that the United States Environmental Protection Agency (EPA) has requirements that are less strict for natural gas generators than diesel generators.

Let’s look at the facts. According to the United States Energy Information Association (USEIA):

“About 117 pounds of carbon dioxide are produced per million British thermal units (MMBtu) equivalent of natural gas compared with more than 200 pounds of CO2 per MMBtu of coal and more than 160 pounds per MMBtu of distillate fuel oil.”

While this might sound technical, the data simply shows that natural gas is a cleaner alternative when it comes to looking for environmentally friendly options.

Another difference in environmental impact is transportation. Natural gas is usually safer and less risky to transport than diesel fuel or gasoline, as the fuel is piped directly to the generator during use. For certain applications, this is a much better choice as the chance of a spill or fire risk is greatly lessened.

Finally, there’s another aspect that needs to be considered—noise pollution. Natural gas generators are often quieter than other types, making them an ideal choice for populated cities and neighborhoods as a backup building power source.

For those in the oil and gas industry, there are a few additional benefits to utilizing natural gas generators. In oil and gas exploration, natural gas – or the raw version that is a byproduct of extraction – is sometimes considered an unwanted byproduct since the pipeline infrastructure needed to capture and “scrub” the gas for downstream makes burning (or flaring) an often cheaper option.

However, recent advancements have seen the emergence of natural gas generators that can be set up to fuel themselves off wellhead gas that would normally be flared and wasted. In turn, this helps reduce additional pollutants – carbon dioxide, carbon monoxide, particulate – that would otherwise be released into the environment.

However, there are a few caveats to this. It isn’t always possible to hook up a natural gas generator to a wellhead and run it immediately, as these generators are designed to run on processed gas.

That’s why the fuel must undergo analysis and, depending on results of the testing, a process called scrubbing before it is suitable for generator use. During this process, moisture and impurities are removed. Hydrogen sulfide (H2S) is a common component of raw gas that requires removal. H2S levels greater than 25 parts per million (ppm) can damage the generator’s engine and parts.

Scrubbing requires additional equipment and expense. That’s why, if you are looking to use a natural gas generator in this type of setting, it is best to work with an expert to determine if it is even possible with your particular wellhead and/or location.

Natural gas generators are an environmentally-friendly choice due to lower carbon dioxide emissions and other harmful pollutants. Lower levels of sound pollution and odor are other benefits that may be critical factors, depending on location. The real deciding factor simply comes down to the type of need you have and the ability to hook up your generator to a natural gas source where required.

Are you interested in learning more about the benefits of both natural gas and diesel generators? Please contact our team at Worldwide Power Products to discuss both types and to determine which one is the best fit for your unique needs.